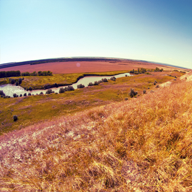 Zhigulevskie Mountains are the part of the Volga Uplands on the right bank of the Volga river. The highest point is Mount Observer - 381.2 m above sea level. It is also the highest point in the middle zone of European Russia. Despite the familiar name of the mountain from the point of view of geographers Zhiguli are just hills. However Zhiguli have got relief mountainous terrain: with rocks, cliffs, steep cliffs, deep ravines and gullies. Zhiguli are the only mountains of tectonic origin in the Russian plain, they are considered to be young (about 7 million years) and still rising. According to various estimates the height increases by about 1 cm per 100 years. Zhiguli are known for their paranormal activity. For a long time there is a legend about a certain proprietor of Zhiguli the mountains. Repeatedly over the centuries some sightings of various light poles of unknown nature were recorded. There are stories that before construction of hydroelectric power station and lifting of a water level it was possible to get into huge caves in the mountains where prehistoric animals, trapped in ice blocks were met. There are some mentions of different mirages arising over Zhigulevskie mountains: the illusive city or a tower, in a number of legends it is told about the certain illusive little men living in these places.